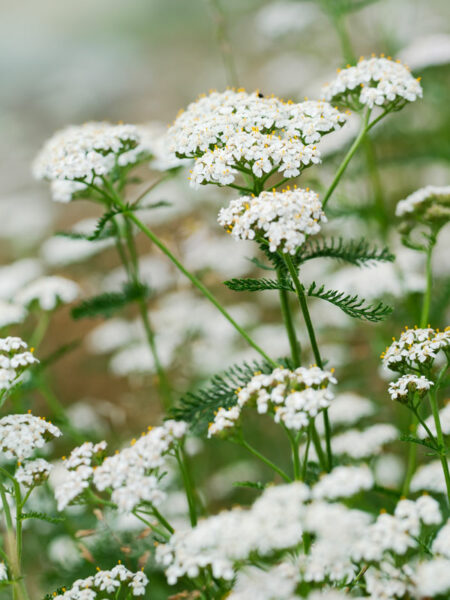 The yarrow is a composite plant that grows in dry meadows and on the edges of fields and is widespread throughout Europe. The entire herb with the delicate leaves, the stem and the white flower umbrella, the false umbel, is used as a medicinal and tea plant.

The main constituents of yarrow are tannins, flavonoids, essential oils (with azulene) and a number of minerals.

Due to its astringent, haemostatic and antibacterial properties, yarrow was known as “soldier’s herb” from Roman times until the Second World War, and was used to treat wounds on battlefields. According to legend, Achilles, the hero of the Trojan War, also used yarrow to heal wounds, as indicated by the plant’s Latin name.

Nowadays, yarrow is mainly used internally. Here, the focus is usually on stimulating and regulating gastrointestinal activity as well as bile and kidney function. Similar to camomile, yarrow can also be a valuable aid for inflammations. In folklore, the bitter-aromatic herb is also said to have a stabilising effect on the circulation.

Content: Yarrow, which was still used by soldiers on the battlefields in the Second World War for wound care. But that is only one aspect of this valuable medicinal herb, because it can do much more. What is it? Find out in our short 30-minute webinar.