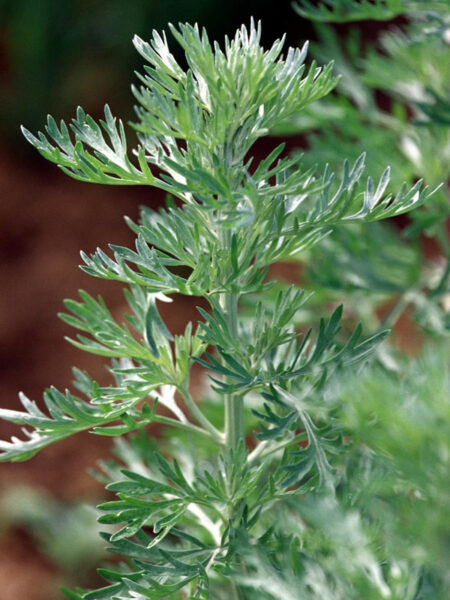 Also called “bitter mugwort”, this herbaceous composite plant grows on barren, dry sites. It is originally native to southern Europe, Asia and North Africa. Monks brought the medicinal herb to Central Europe in the Middle Ages and cultivated it in monastery gardens.

The cut herb as well as the leaves of wormwood are used, whose value-determining ingredients are 0.3 – 1.5 % essential oil, sesquiterpene bitter substances, flavones and tannins. Nowadays, wormwood is mostly prepared as a tea.

In ancient Greece and Egypt, wormwood with its bitter substances was used primarily to stimulate the appetite and support digestion. The Latin generic name of wormwood refers to the Greek goddess of the hunt, Artemis, who is also known as the “mother of herbs”. In the Middle Ages, wormwood was also used for worming and exhaustion. In folklore, this herb is also used for regeneration after illnesses and for states of weakness. Wormwood is thus also a central component of the universal remedy of folklore, Swedish bitters.

In modern phytotherapy, wormwood has been shown to have appetite-stimulating, digestion-strengthening, anti-inflammatory, bacterial growth-inhibiting and central nervous system-stimulating effects. According to recent experimental and clinical studies, wormwood is also said to have positive effects on malaria, the chronic inflammatory bowel disease Crohn’s disease, on tumour cells and on the memory performance of Alzheimer’s patients.

Content: Wormwood is proverbially bitter to the taste, so our hearts do not fly to it right away. We know it as the central ingredient of the universal remedy of folklore, Swedish bitters.

But why “bitter” is not only important for digestion, and why medical research is currently looking intensively at wormwood, you will learn in this short 30-minute webinar.