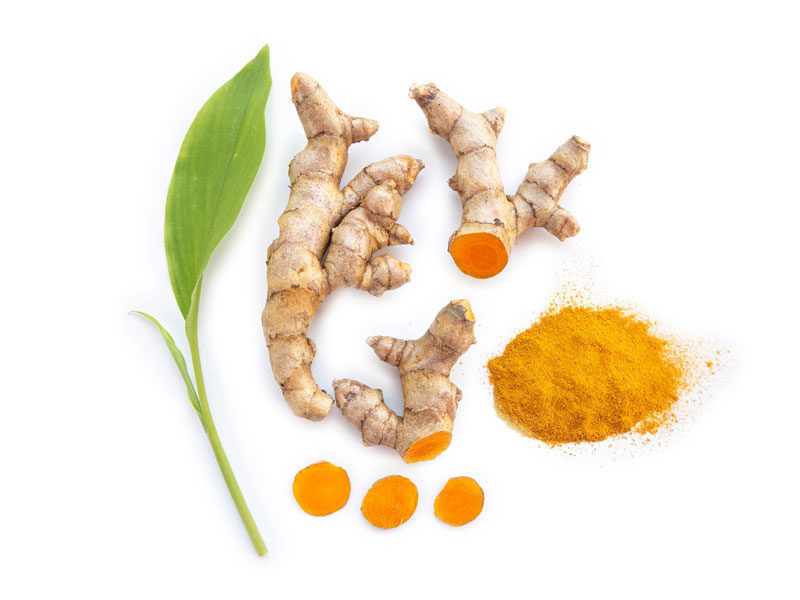 Turmeric or yellow ginger is a plant species within the ginger family and originates from South Asia. The strong, tuberous rhizomes are intensely yellow and are used fresh or dried as a spice, dye or medicinal herb when peeled. In our latitudes, turmeric is mainly known as an essential ingredient of curry powder, but in modern cuisine it is also increasingly used as a single spice.

There are several types of turmeric, which are used either primarily as a spice or as a medicinal agent. Turmeric contains up to 5% essential oils, including zingiberene and tumerone, and up to 3% curcumin.

Turmeric is used in many ways in traditional Indonesian medicine, including to strengthen the immune system, for respiratory diseases, rashes and to prevent infections. The Arabs brought turmeric to Europe in the Middle Ages, where it was initially used exclusively as a spice.

Today, turmeric is used medicinally to support the production of bile. Turmeric has also proven its worth as a cholesterol-lowering and medicinal herb with a liver-protecting effect. Various clinical studies have shown that the ingredient curcumin has anti-cancer, antioxidant and anti-inflammatory effects. Recent studies have looked at the possible effects of curcumin on diseases such as Alzheimer’s, Parkinson’s and cystic fibrosis.

Without a doubt, turmeric is a medicinal herb with great potential that we will be hearing a lot more about. All the more reason to include it more often in our diet as a spice.