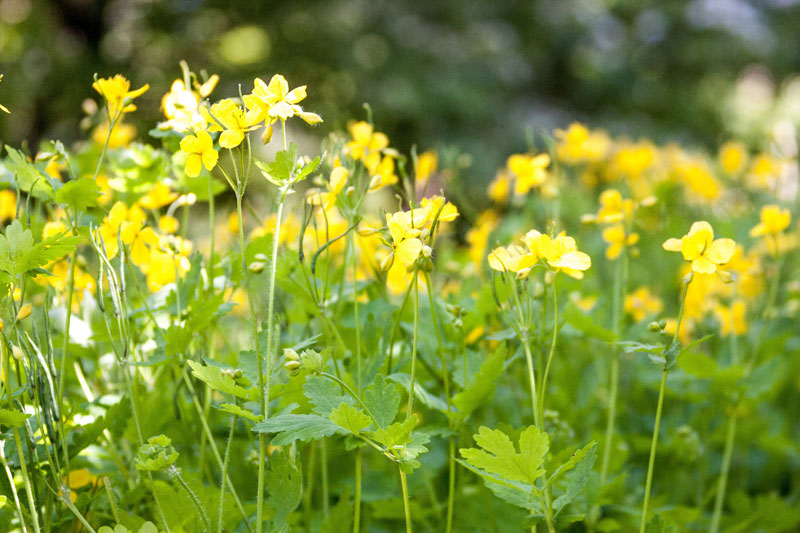 The yellow flowering celandine is native to the temperate and subtropical zones of Europe and Asia. It belongs to the poppy family. The above-ground herb is used at the time of flowering.

Celandine is an alkaloid drug with antispasmodic properties. Its valuable constituents are 0.6-1 percent alkaloids, caffeic acid, flavonoids and carotenoids.

The plant was already used in ancient times to treat jaundice. Its yellow milky sap was used externally to treat warts. In the herbal books of the Middle Ages, celandine was also recommended for jaundice and as an analgesic for toothache and gallbladder complaints. Later, the herb was also used internally as a laxative and to stimulate urination, while poultices and infusions were used to treat hardened glands and chronic rashes.

Until the 20th century, celandine was recommended as a favourite liver remedy. Today, this has largely been abandoned due to the danger of side effects, as the effect of the alkaloids in celandine is relatively strong. They are also subject to great fluctuations in the spectrum. It is therefore recommended to use standardised preparations for internal use according to a doctor’s instructions in order to avoid poisoning. External use, on the other hand, is safe.

The spasmolytic effect of this medicinal herb on the muscles of the upper digestive tract, its bile-stimulating, slightly pain-relieving and anti-inflammatory effects are scientifically proven. The milky sap of the celandine has antiviral potential, which explains its use as a wart remedy.