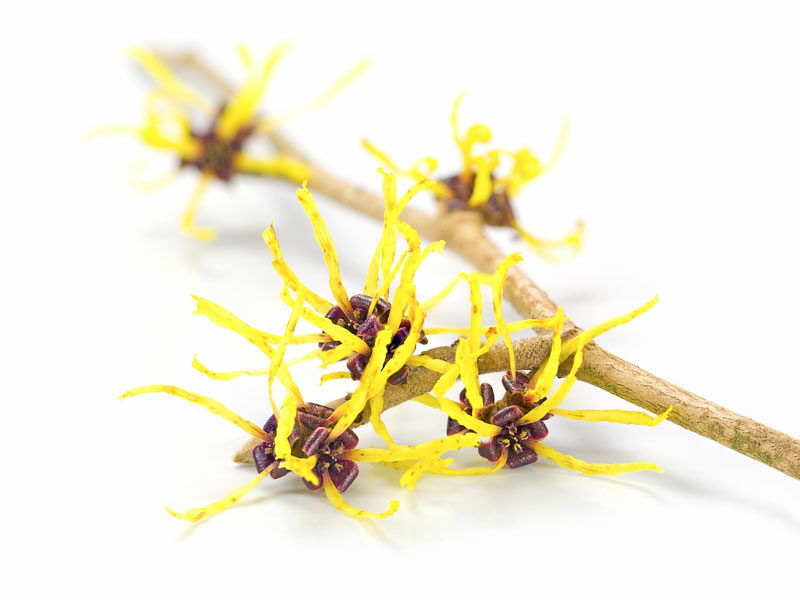 The “Virginian” witch hazel originates from North America and only came to us in the 18th century. In gardens and parks, the shrub already blooms bright yellow in late winter and is thus also visually exceptional.

The North American natives already used the healing power of witch hazel, especially for all kinds of injuries, such as skin cracks and abrasions as well as frostbites, and later passed on their knowledge to the first European settlers. The “miracle cure” witch hazel was also used internally for diarrhoea, fever, colds and eye infections. In our latitudes, the increased use of witch hazel as a wound remedy did not appear until the 1930s.

Both the leaves and the bark of the shrub are used medicinally. Witch hazel is a tanning agent. The leaves contain 3 – 8 % tannins, the bark 8 – 12 %. In addition, proanthocyanidins, flavonoids, some essential oil and caffeic acid derivatives are found in the leaves. Aqueous extracts and aqueous alcoholic extracts as well as aqueous distillates (“witch hazel water”) are produced as medicinal preparations.

The effects of witch hazel are manifold. It has germicidal, anti-inflammatory, cell-protecting, astringent, haemostatic, tissue-compressing, wound-healing, anti-secretory and itch-relieving effects.

This is why witch hazel is primarily used for wounds and inflammation of the mucous membranes in the mouth and intestines. However, witch hazel is also the medicinal plant of choice for neurodermatitis, haemorrhoids, phlebitis and certain allergic diseases.

It is also a component of many cosmetics, creams, ointments and aftershaves.