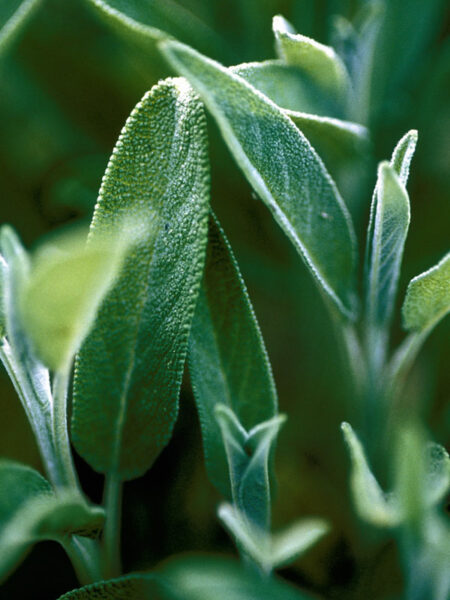 The labiates from the Mediterranean region is often used as a culinary herb. Its Latin name “Salvia”, from “salvare” (= to heal), already refers to the immense healing power of the sage plant. It was therefore considered by many to be a panacea for centuries.

The medicinal herb is effective against bacteria, viruses and fungi. It also has an anti-inflammatory, astringent, secretion-promoting, antiperspirant, appetite-stimulating, cell-protecting and weak blood sugar-lowering effect. The main areas of application for sage are inflammations of the mucous membranes of the mouth and throat, non-specific gastrointestinal complaints and increased perspiration. Clinical studies also document the effect of sage extract against cold sores. Furthermore, its use against hot flushes during menopause has been documented.

In folk medicine, sage preparations are popular against hoarseness, coughs and colds, as a sedative and general tonic, for bleeding, toothache and for wound healing.

Recent scientific studies give indications of other possible uses for this medicinal plant. Sage is said to have a lowering effect on blood lipid levels, to help with anxiety disorders and possibly to alleviate the symptoms of mild forms of Alzheimer’s disease as well as to increase mental abilities.

Webinar
Sage – more than a tasty ingredient for saltimbocca

Content: We are probably familiar with sage as an aromatic kitchen herb. However, only a few people know that it is also a plant with immense healing powers.
In this webinar, you will learn about the many health-promoting effects of this labiatae.