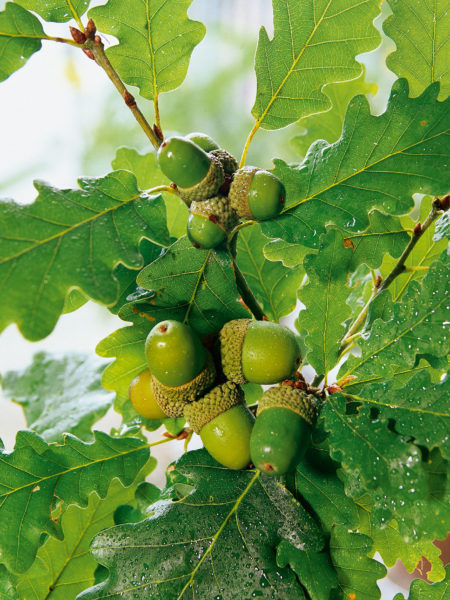 The oak is known as a supposedly original German tree, although it is native to the whole of Europe, Asia Minor and the Caucasus countries. The powerful tree with its mighty crown and gnarled branches can live for over 1000 years. In the mythology of the Germanic and Celtic peoples, the oak enjoyed the highest veneration. An extract of the oak bark used to be used for tanning leather.

But modern medicine also appreciates the active substances contained in the twig or trunk bark of young and up to 20-year-old English oaks. This bark is called “mirror bark” because of its silvery-grey shiny surface. Depending on the age of the branches, it contains 8-20% water-soluble tannins and flavonoids. The ingredients in oak bark have astringent, anti-viral, anti-inflammatory, anti-secretory, blood- and itch-relieving, anti-diarrhoeal, tissue-compressing and disinfectant effects. While preparations of oak bark by decoction or industrially produced thick extracts are used internally for non-specific, acute diarrhoeal diseases, they are used externally for inflammatory skin diseases, for example for inflammations in the mouth and throat area as well as in the genital and anal area, but also for increased foot perspiration.