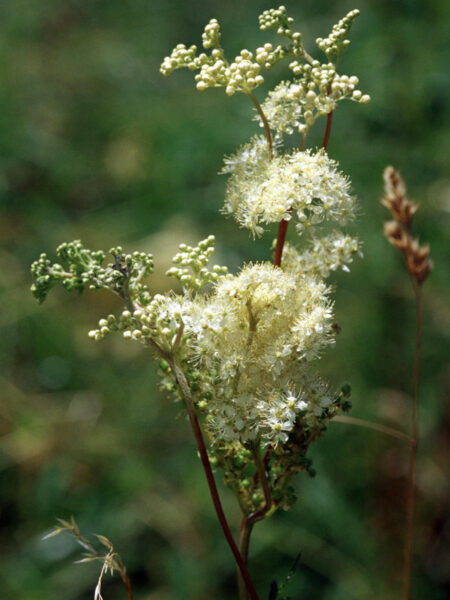 The meadowsweet is an aromatic herbaceous rose plant that often thrives in damp meadows and along streams. The name is said to come from the sweet scent that escapes after mowing.

Also called meadowsweet, it is an old medicinal herb, but there are hardly any written records about it. In France and Belgium, the flowers were used to flavour desserts and wine.

The flowers are mainly used for medicinal purposes, but also the upper parts of the herb. They contain essential oil, which is composed of about 75 % salicylaldehyde and salicylic acid methyl ester, plus up to 5 % flavonoids and tannins. The salicylates, which are also found in willow bark, were the model for the development of acetylsalicylic acid (ASA) in pharmaceutical research. The best-known representative, Aspirin®, derives its brand name from the Latin name of meadowsweet. Salicylates as a natural source are much better tolerated than ASA, because the metabolism to salicylic acid, which can have a damaging effect on the sensitive stomach mucosa, only takes place in the liver.

The medicinal herb has anti-inflammatory, astringent, antipyretic and diuretic effects. Germicidal and pain-relieving effects are also described. As a result, meadowsweet is mainly used for colds with fever, headaches, rheumatic complaints, gout, kidney and bladder diseases and oedema.