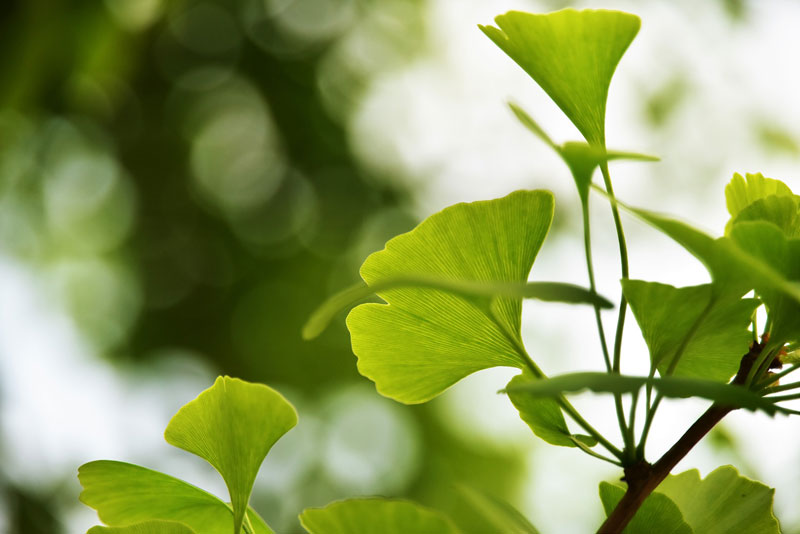 The Ginkgo, also known as the “temple tree”, is called a living fossil. It is the only surviving representative of the Ginkgoacea family, which were widespread worldwide around 250 million years ago. In our time, of course, the ginkgo is only found in China and Japan, where it has been revered for thousands of years and its leaves, seeds and roots are used medicinally. At the beginning of the 18th century, the ginkgo first came to Europe as an ornamental plant. Europeans did not discover its healing power until the mid-1960s, when the first ginkgo special extract was developed and numerous scientific studies followed.

In western culture, only the broadly fan-shaped, centrally lobed leaves are used medicinally to obtain extracts from them. Their value-determining constituents are mainly flavone glycosides, terpene lactones and ginkgolic acids.

There is a wealth of clinical and experimental studies on the healing power of ginkgo, which essentially support its effect on the brain and blood vessels. Ginkgo extract protects the nerve cells and mitochondria, increases memory performance (dementia), inhibits brain oedema caused by trauma and is used, among other things, for balance disorders and tinnitus. Ginkgo improves the flow properties of the blood and promotes blood circulation, especially in the area of microcirculation.
For this reason, ginkgo in the form of ready-to-use preparations is not only successfully used in veterinary medicine for brain disorders and ear rim necrosis in small animals, but also for hoof and claw rotations and joint problems in large animals.