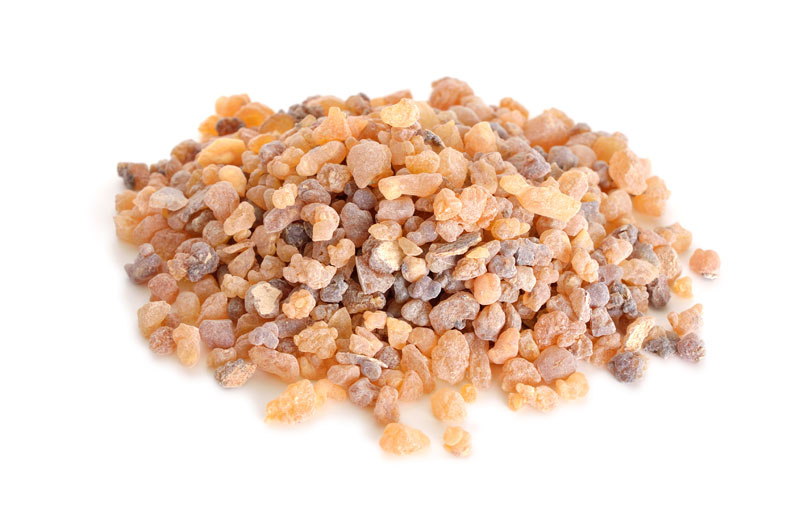 The frankincense tree belongs to the balsam tree family and is native to southern Arabia and the Horn of Africa.

The air-dried gum resin of the frankincense tree has been used for around 4000 years not only as an incense drug for ritual, cultic purposes, but also as a valuable medicinal plant. Frankincense has been highly valued and extremely precious since early antiquity, as it had to be transported by caravans across the Arabian Desert to the Mediterranean Sea via the Frankincense Route.

The value-determining ingredients of frankincense are 50-70 percent resin, half of which consists of boswellic acids, around 20 percent mucilage and 4-8 percent essential oil. Already in early antiquity, the gum resin was used in the Mediterranean region primarily for wound treatment and for diseases of the windpipe due to its antimicrobial and anti-inflammatory effect. Today, it is known that the boswellic acids are also effective against the dreaded multi-resistant germs (MRSA). In addition to its antimicrobial and anti-inflammatory effects, frankincense has pain-relieving and immunomodulating effects. Modern research has been able to decipher the active principle of the boswellic acids. They actively intervene in the inflammatory process by blocking the formation of the body’s own inflammation-causing substances.

In Ayurvedic medicine, frankincense preparations have long been used to treat chronic and rheumatoid arthritis. With the ageing of the population, this field of application for frankincense is also becoming increasingly known in our country. Furthermore, the effectiveness of frankincense in inflammatory bowel diseases such as irritable bowel syndrome, ulcerative colitis and Crohn’s disease has also been confirmed in clinical studies.

Currently, scientists are experimenting with the use of frankincense in malignant brain tumours and researching the extent to which nerve damage associated with multiple sclerosis can be reduced.