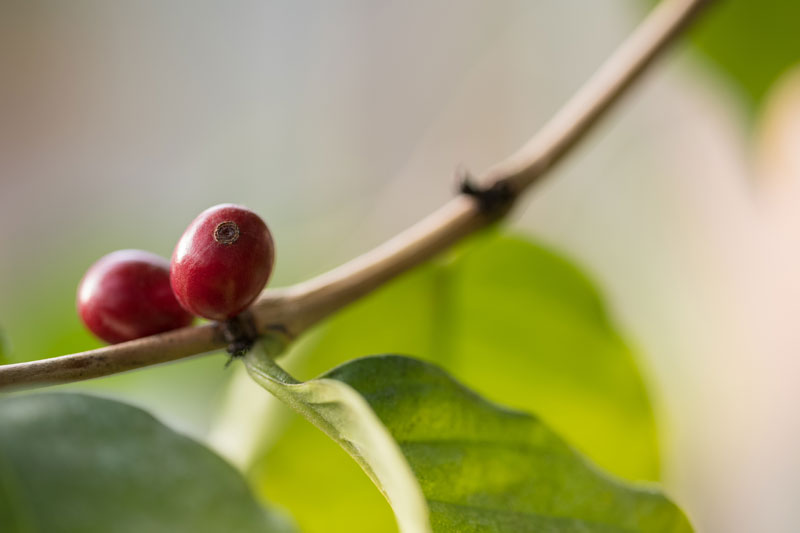 The coffee plant is an evergreen shrub from the redbud family that can reach a height of 9 metres. Originally from Ethiopia, it is now cultivated in many places in the tropical regions of Africa, America and Asia.

The red drupes, commonly called “coffee cherries”, each contain 2 seeds, the “coffee beans”. These are dried, then fermented and roasted, and finally prepared as a beverage for consumption.

Coffee belongs to the alkaloid drugs and has a wide therapeutic range. In addition to the main substance caffeine, the most important substances in the seeds are chlorogenic acid, flavonoids and tannins. The best-known effect of coffee on the mind and body is its stimulating effect on domestic use. Coffee influences the blood flow to the brain and stimulates the central nervous system. This makes it generally suitable for disorders of the general condition and states of weakness, and it also has a stimulating effect on the appetite. However, coffea is clearly more than just a stimulant. Its influence on the blood flow to the kidneys has a slight diuretic effect. In folklore, coffee is therefore also used to treat oedema.

Beyond this use, the medicinal herb has a strong antioxidant (cell-protecting) and anti-inflammatory potential, depending on the degree of roasting of the beans. This has a particular effect on the respiratory tract as well as the gastrointestinal tract. Preparations made from coffee stimulate the metabolism and are able to protect the organs liver and pancreas.

The immunomodulating potential of special coffee preparations is of great medicinal interest. Various studies on newborn calves have shown that preventive as well as therapeutic administration of Coffea has a positive effect on infectious diseases of the digestive tract and the respiratory tract.

More recently, there has been increasing evidence that coffee bean preparations can not only reduce the risk of diabetes in humans, but also of Alzheimer’s and Parkinson’s disease.

Content: In this webinar we deal with an exotic medicinal herb that can be found in almost every household. Without a cup of coffee in the morning, many of us do not get up to “operating temperature”. It is less well known that the roasted seeds of the coffee cherry, the “coffee beans”, are much more than just a stimulant, and that highly effective medicines can be made from them.