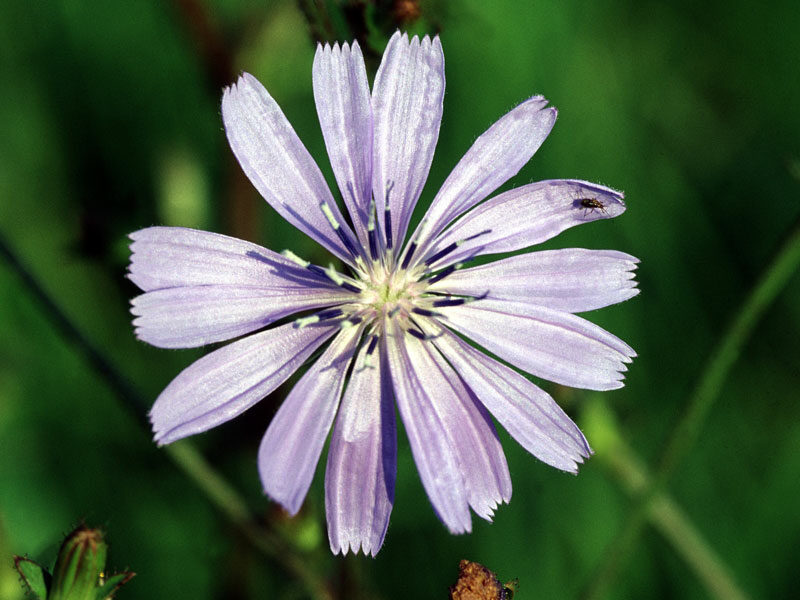 When young, it resembles a dandelion, but in the second year it grows like a bush to a height of over one metre. The composite flower then shows a multitude of bright blue flowers that are only open for a single morning.

The entire medicinal herb, also called chicory, can be used. It contains bitter substances such as lactucin and lactucopicrin, which act on the entire digestive system, including the pancreas and spleen, and stimulate the appetite.

The taproot of the chicory contains the dietary fibre inulin. This is an indigestible sugar that supports the positive intestinal flora and counteracts the development of pathogenic bacteria in the intestine. Inulin also has a beneficial effect on the immune system.

After the war, roasted chicory root was used to make the substitute coffee also known as “muckefuck”. Cultivated chicory subspecies include the slightly bitter chicory, radicchio and endive lettuce.
In short, chicory is a valuable medicinal herb from the wayside, for which there are many possible uses.

Content: The bright blue flowers of the chicory are only open for a single morning. Perhaps that is why it seems so mysterious to us?
In the post-war period, the root of this plant, also called chicory, was used to make the substitute coffee “Muckefuck”. But even today it has much to offer us.
How we humans as well as our animals can benefit from the healing power of this composite flower, you will learn in this small 30 minute webinar.