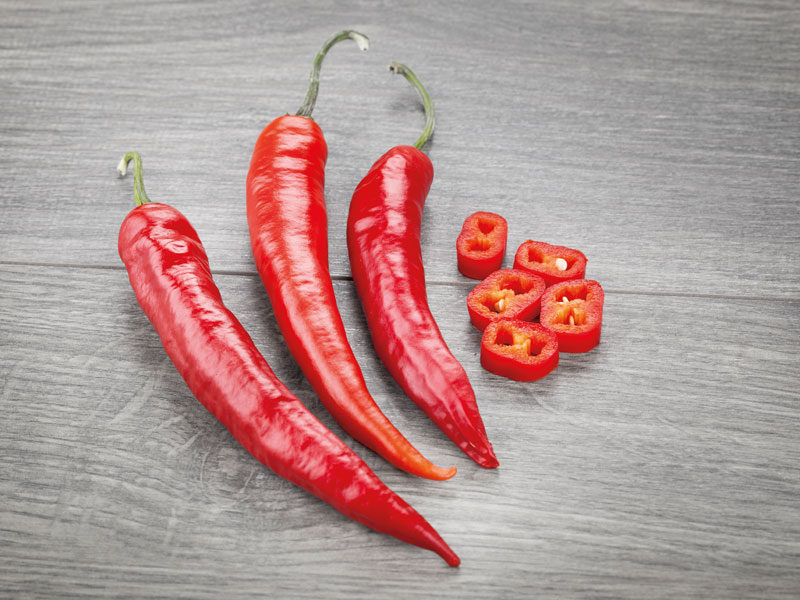 Also known as chilli, Spanish or hot pepper, the nightshade plant originally comes from Latin America. The fruits, colloquially called “pods”, are actually berries and are used as a hot spice as well as a remedy.

The Aztecs already used the ground fruits internally to aid digestion and against worm infestation. The consumption of cayenne pepper was also said to have an aphrodisiac effect.

The value-determining ingredients of the cayenne pepper fruit are 0.4-1% capsaicinoids, including capsaicin, as well as carotenoids and flavonoids.

Apart from its use as a hot spice, as an ingredient in Tabasco or Sambal Olek, cayenne pepper is only used internally in folk medicine. It is used for indigestion or in the form of a gargle solution for sore throats and laryngitis.

In modern medicine, cayenne pepper is only used externally as a tincture, ointment, emulsion or also as an (ABC) heat patch. The effect of the pungent ingredient capsaicin has been intensively researched. Applied locally, capsaicin preparations work according to the principle of “pain against pain”. Immediately after application to the skin, there is increased blood circulation and a feeling of pain and warmth. Shortly afterwards, the sensation of pain is dampened. Capsaicin has a selective analgesic effect and suppresses inflammatory reactions. In skin diseases such as psoriasis, which is associated with severe itching, the capsaicin effect is described as “cortisone-like”.

The main areas of application for preparations based on cayenne pepper are muscle and joint pain, nerve pain and severe itching. Contact with mucous membranes must be avoided at all costs with remedies containing preparations made from cayenne pepper. They may also only be used on intact skin.